This was my first ever smartphone. I remember I paid close to RM3,000 for this. Back then in 2006, it was one of the best mobile phones in the market in Malaysia. There were other premium phones and this was one of them. It was fast and simple. It’s capable of taking good quality photos, installing applications like Gravity (a social media application) and surfing the web and reasonable speed.

Before Apple and Samsung and HTC, before iOS and Android, Nokia and its Symbian operating system were the finest of the lot. They literally dominated the mobile phone industry. But that was history. Ever since the introduction of iOS and Android operating systems, Nokia… and Rim (the maker of Blackberry) have fallen from grace. Their market shares had tumble to the point of no return.

But this piece of equipment… It will forever be part of my mobile phone history. I used it quite some time before retiring it. It saw some day light whenever I needed a spare. And surprisingly, till this day, it is still functioning like before.

Somehow, there’s sentimental value to it that I can’t shake it off. 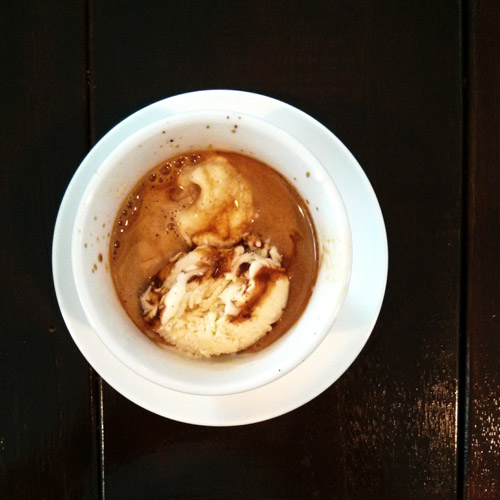 Been liking this lately. I like the combination of warm espresso shot coupled with a scoop of vanilla ice cream. But the only problem I have is that you got to finish it fast or you’ll be drinking some weird thick creamy coffee.